What are your views?

And for a bonus question: what is your belief regarding the Millenium? (Since I cannot have multiple polls on the same thread and twenty options seems a bit nuts for a poll question, reply with your answer to the poll above and the chart below.) 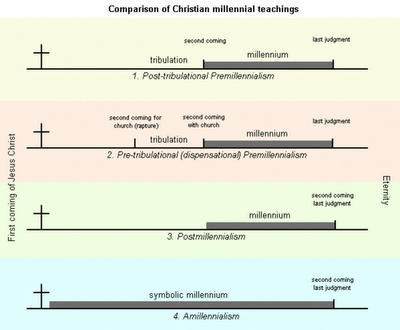 As an aside, it would be nice if BBC image resizing was allowed on the boards, Webby.

I wish I could see the polls.

I lean heavily toward the preterist perspective.

I put eclectic, but I am an idealist mainly.  I do see many (MANY) first century references, and so I guess it would be a mixture w/ preterism.  I.e. Rev is clearly a polemic against the Roman empire and its injustices, but I would say that any empire and any injustice is really the issue for Rev.  It uses concepts like the Nero redivivus with the 666 and so on.  It has much to do w/ trade guilds and how a Christian should separate themselves from Babylon/Rome by not eating meat offered to idols during the guild stuff.

That said, the full on preterist interpretation of Rev is really a futurist view.  The only difference is that the future is very near and later fulfilled in 70.  Other than that, they both seek to decode the future in the same way.
M

I'm probably closer to the Post-trib view, certainly open to a pre-trib view as well.  I am a futurist too.

As a student of church history I would love for Preterism to be true, but I've found it to be woefully problematic when meshed with what really occurred in the 1st century.  It presents God as someone that kind of knew something was going to go down, but that ended up getting a lot of it wrong.  Gentry and others that write academically about the subject really pick and choose what historic figures fit in where, but often show no evidence to back their claims up.  I've known some great folks that are preterists, but I can't follow that line of thought a bit.
I

It will all work out in the end.
S

Futurist  - I am pre trib rapture . ( I know I know here come the stones and pitchforks )
S

rsc2a said:
As an aside, it would be nice if BBC image resizing was allowed on the boards, Webby.
Click to expand...

To expand just a little, I believe the Rapture of the Church precedes the Millennial Kingdom, that there are converts to Christ among both Jews and Gentiles within the seven year period of the Tribulation, that some Christian converts will die (and are resurrected when Christ returns and establishes the Millennial Kingdom) and some will live (who are the ones who populate the Kingdom when established), but that all unbelievers that physically survive the Tribulation will perish at Christ's return, as Christ will gather out of His Kingdom all things which offend. The Kingdom will produce unbelievers in the descendants of the born again believers who initially populate the earth, and, 75 days prior to the end of the Millennial Kingdom (Daniel 12) Satan, who was bound when Christ returned 1000 years earlier, will be loosed, and the unbelievers will rally to his side, and will, of course, be destroyed.

When the Millennial Kingdom ends, the Great White Throne judgment takes place, and the resurrected dead from among the lost (who have been in Hades since physical death) are judged, cast into Hell, and this physical Universe ends, yielding itself to the New heavens and earth of the Eternal State, where believers dwell with God in that One Fold which both Israel and the Church picture in the physical realm now (both progressive dispensations which should not be, at any time, equated).