You are using an out of date browser. It may not display this or other websites correctly.
You should upgrade or use an alternative browser.

What do you believe?

Do you believe that the election was stolen from Trump?

Stolen might be too strong of a word. There are many questions especially in MI/WI/PA. There was at least the appearance of fraudulent voting. In most cases I've not heard explanations that would give comfort that it was legit. On top of that you have deadlines changed and methods of voting changed by governors/courts when the state legislatures are the only ones with the ability to make such changes. However, after all is said and done, there was not a majority in any state legislature that put up a challenge. Since the state legislatures ultimately have the authority in deciding who the winner is-they are in the end the final say on who the "winner" is.

Biden had the minority and the homosexual vote plus

NBA Commissioner Adam Silver who is now anti-semetic and is a slave to LeBron and told every NBA player to hate white people and worship Biden/BLM/China.
Hellsong/Carl Lentz/Brian Houston/Steven Furtick/Perry Noble/Craig Groeschel/Ed Young Jr/Richie Wilkerson Jr/Andy Stanley/Blaine Bartel/Ray Boltz/Josh Harris with the former fake Christians that started the "Homosexuals Are Going to Heaven" movement.
TBN/PTL Club had BLM and Biden bumpers all over their programming. Even showed a 2009 PTL episode where a black preacher prayed on TBN that Michael Jackson would be found innocent and have charges dropped.
Every feminine seeker sensitive pastor as all of those churches are liberal/pro liquor/pro abortion/pro gay marriage/anti-military.
TBN Superstars Rod Parsley and T.D. Jokes (a modelist and racist).

Jo said:
Do you believe that the election was stolen from Trump?
Click to expand...

There was never a point on election night when Trump had a decisive victory that was suddenly, inexplicably upset. The pattern followed every other election I've ever watched: basically, the two candidates started out neck and neck, but as more and more polls came in, Biden's lead widened.

There almost certainly were instances of voter irregularities and voter fraud at the local level. You've got in excess of 150 million people voting--someone is going to screw up or try to manipulate the results. Of course such should be investigated and prosecuted. Plus, if I may comment as a Canadian observing from the outside, it doesn't help that there isn't one standard voting method from locale to locale. There was also the added confusion of mail-in voting thanks to the pandemic. But there was never evidence of any voter fraud that would have changed the outcome. Trump lost--not by a landslide, but decisively nonetheless.

Biden will be President for the next 8 years while America will be going to hell and become a communist nation. 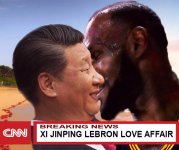